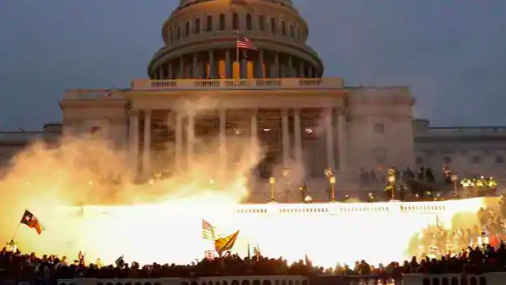 Donald J. Trump’s most recent spiral away from reality began just after 3 November 2020 when it became apparent that he was losing the presidential race. From that day forward, he began agitating his followers by repeating over and over again the lie that he, not Joe Biden, had actually won and that the election had somehow been stolen from Trump.

For two months, Trump peddled this lie and similar nonsense to his gullible minions, and by Wednesday, January 6, when he returned to Washington with thousands of his followers in tow, the pot was at the boil. His tweets had become more and more provocative and incendiary: Come to Washington D.C. January 6! It’s going to be WILD! he told his 88 million Twitter followers. In D.C., not only did Trump stir the pot, he poured gas on the roaring fire: “Fight like hell,” he urged as he told them to make their way to the Capitol.

We all watched in horror as his handiwork was realized in the desacration of the Capitol complex.

Trump attempted a coup. He incited thousands of his followers to riot, and as a result, five people are dead, and the Capitol’s House and Senate chambers are in shambles.

However, his attempted coup failed.

Donald J. Trump should be detained and charged with inciting to riot and insurrection, because incite is exactly what he did. Senator Ted Cruz of Texas and all the other members of Congress who supported Trump in his lying and agitation should also be charged. Though they were successful in starting a riot that defiled the capitol building and traumatized the people who work there, Trump, Cruz, and their followers were unable to prevent the Congress from certifying the Electoral College ballots.

So, in spite of Trump’s misguided, felonious efforts, Joe Biden and Kamala Harris will be inaugurated as president and vice president of the United States on Wednesday, January 20, 2021!