On Wednesday, 6 September 2017, the Dallas City Council voted 13-1 to immediately remove the Robert E. Lee statue from Lee Park in Oak Lawn. I drove over to the park to watch the statue’s removal.

There were two crowds, each of 50-75 people, watching the workers when I arrived. One group was downhill from the front of the statue, the other crowd was behind the statue level with its base. Because I parked next to Arlington Hall, I ended up with the group behind Lee and his companion. The two-figure statue was already strapped to the crane; and we all watched with a mixture of amusement and concern as the workers tried to figure out how to remove the 12,000-pound bronze sculpture from its base. 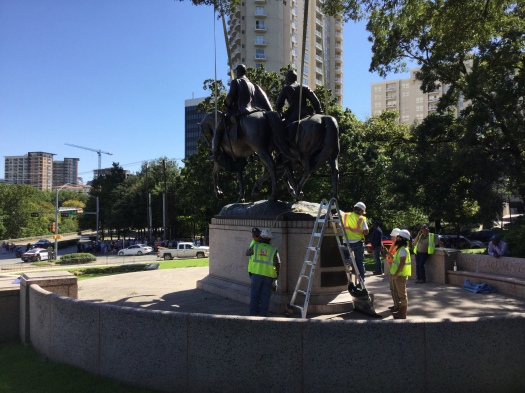 Noelle Walker, an NBC5 reporter, interviewed me, and I was still wearing her microphone when word began passing through the crowd that a temporary restraining order (TRO) had been obtained by Hiram Patterson on behalf of the Sons of Confederate Veterans. So, the statue could not be removed on Wednesday. When Noelle asked how I felt about that, I said though I was disappointed, “Tomorrow is another day!”

And indeed, Thursday, 7 September, was another and different day as U.S. District Judge Sidney Fitzwater held a hearing that resulted in the dissolution of the TRO that he had issued the day before. The City Council is now free to remove the Robert E. Lee statue from Lee Park. The Dallas Morning News quoted City Manager T.C Broadnax’s chief of staff, Kim Tolbert, as saying Lee’s statue will be removed “over the next few days.” Mayor Pro Tem Dwaine Caraway said Lee’s statue “will eventually be removed,” but he offered no timeline.

Today, Friday, 8 September, the Lee statue still is in place. Although there was a crane ready to remove it on Wednesday; according to NBC5, today, apparently, there is no crane available that can handle the 14-foot tall, 12,000-pound statue. 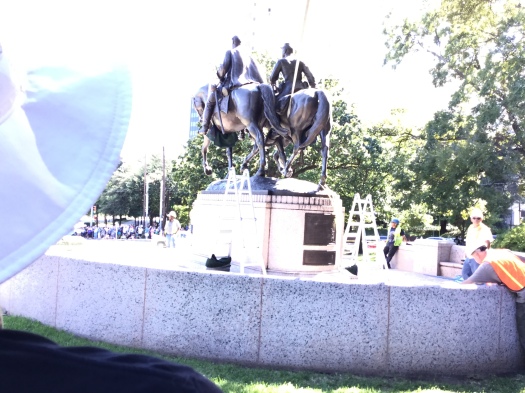