On Friday, 15 September 2017 the Robert E. Lee statue in Dallas’s Lee Park was loaded onto a flatbed truck and taken to an undisclosed location for storage until its permanent disposition is decided. I wasn’t able to be there for the removal, and I did not want to attend the confederate supporters’ protest on Saturday, so I went by on Sunday to check out the scene at the park.

The pedestal with its bronze plaques adorned with two sprays of once-fresh flowers remains. The granite half-round bench that faced the back of the statue remains as well. Chiseled into its backrest is the statement in capital letters, “NO CALUMNY CAN EVER DARKEN HIS FAME FOR HISTORY HAS LIGHTED UP HIS IMAGE WITH HER EVERLASTING LAMP.”

Both before and after his death in 1870 Robert E. Lee was lionize and memorialized as if he had been on the winning side of the War between the States. Well he wasn’t, and finally his infamy has caught up with him here in Dallas and elsewhere.

In Dallas, Lee reigned from his pedestal in a park named for him for 81 years, and now, finally, he is gone.

I, for one, am relieved even though the issue of confederate monuments in Dallas is not over yet.

The mayor’s commission still must decide what to do with the Lee statue; and they also have to consider the confederate monument behind the convention center. The DISD school board has already decided to rename several schools that bear the names of confederate “luminaries,” so the city is on a good path. 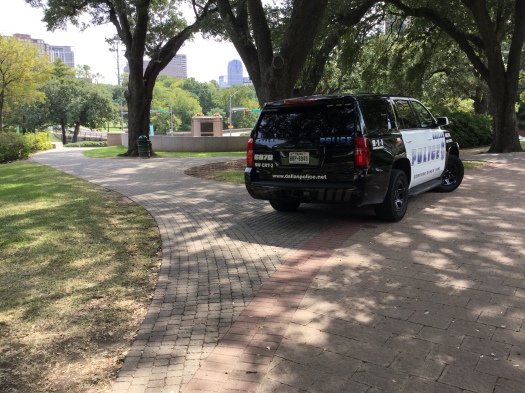 And Lee Park is once again quiet with just one police SUV keeping an eye on things. I‘ll keep you posted . . .